How To Use TikTok Analytics For Your Business

If you’re not looking at your analytics on TikTok, you’re insane.

You have got to be looking at your analytics to determine what content is working well and what you should continue doing.

And in this article, I’m going to talk to you all about how to use your analytics so you could do better content so you can ultimately make more money in your business.

Now, I just gotta be honest with you. I’m not an analytic kind of person. I’m just living to the fun stuff.

But we can’t just do the fun stuff, we have to do the hard stuff, some of the hard things are not as sexy nor as fun as analyzing things.

And so the good thing is that TikTok has made this super easy, they’ve made it super easy on how to use analytics, how to get to analytics.

So I’m going to show you first how to get to your analytics, and then also how to use your analytics to make better content for your business.

Then you’re going to want to click on the hamburger menu in the upper right hand corner. 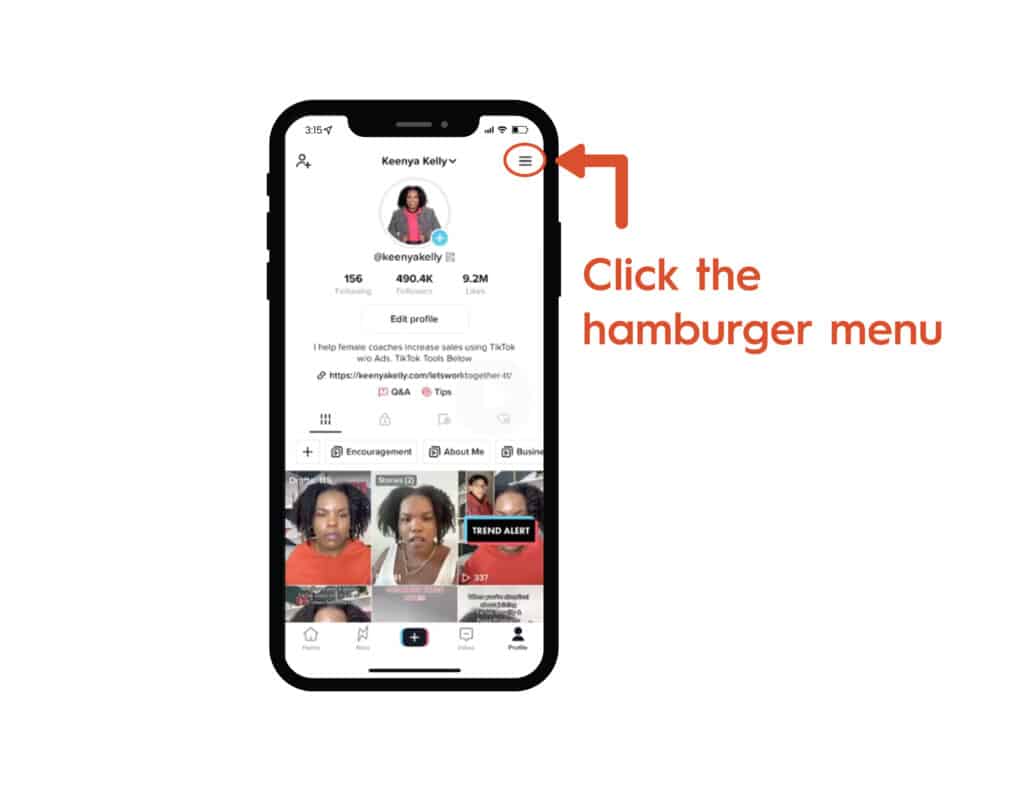 So once you click there, then you’ll see a box pop up and you want to click on Creator tools, that’ll take you to a separate screen where you see there it says analytics. 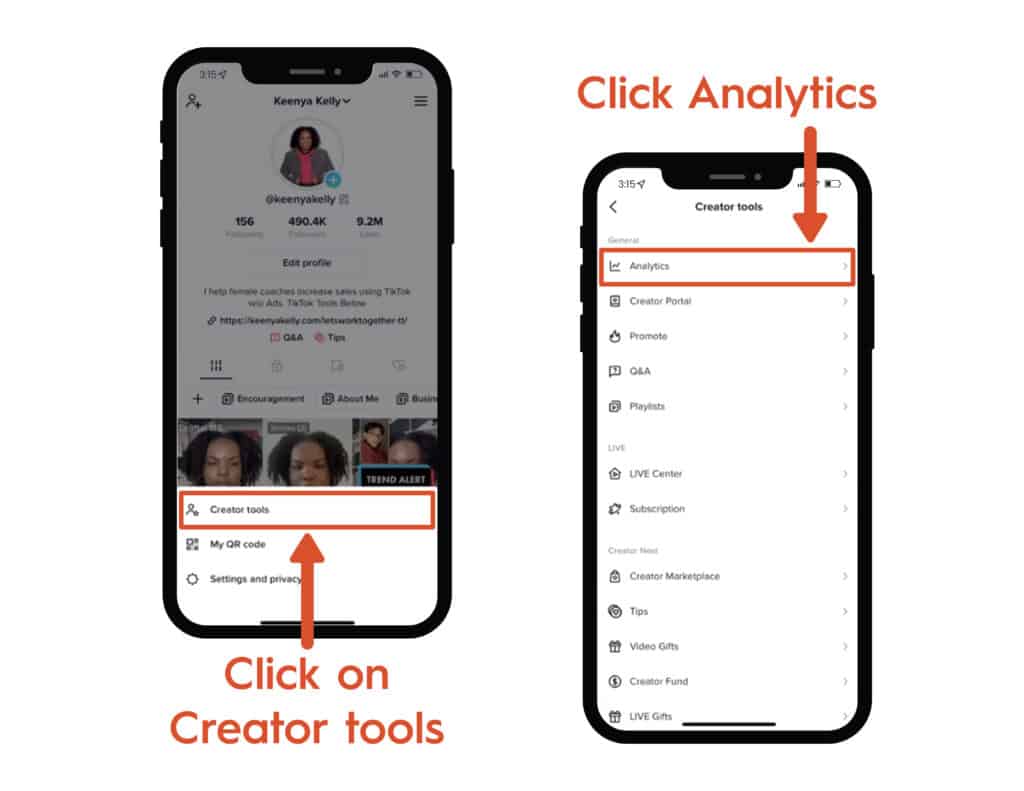 So let’s go ahead and click on the analytics.

And what you’re going to want to do is as you can familiarize yourself here inside of this portal. 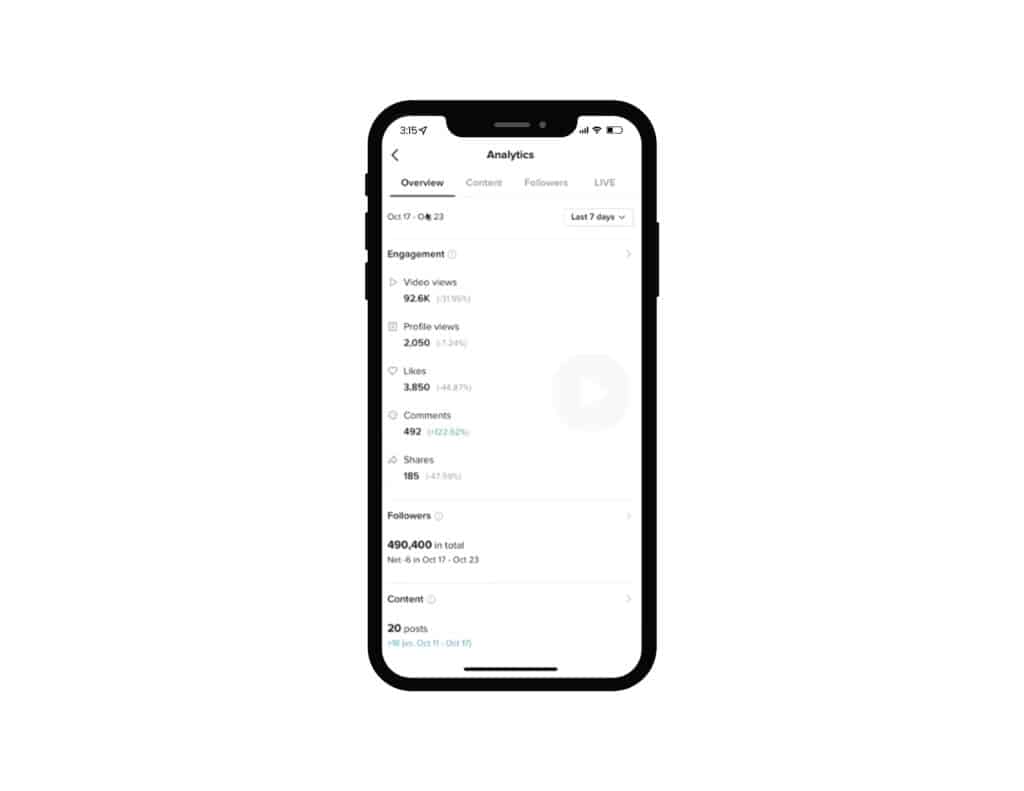 So this has given you an overview of the last seven days. But we can also do the last 28 days, 60 days or a custom. 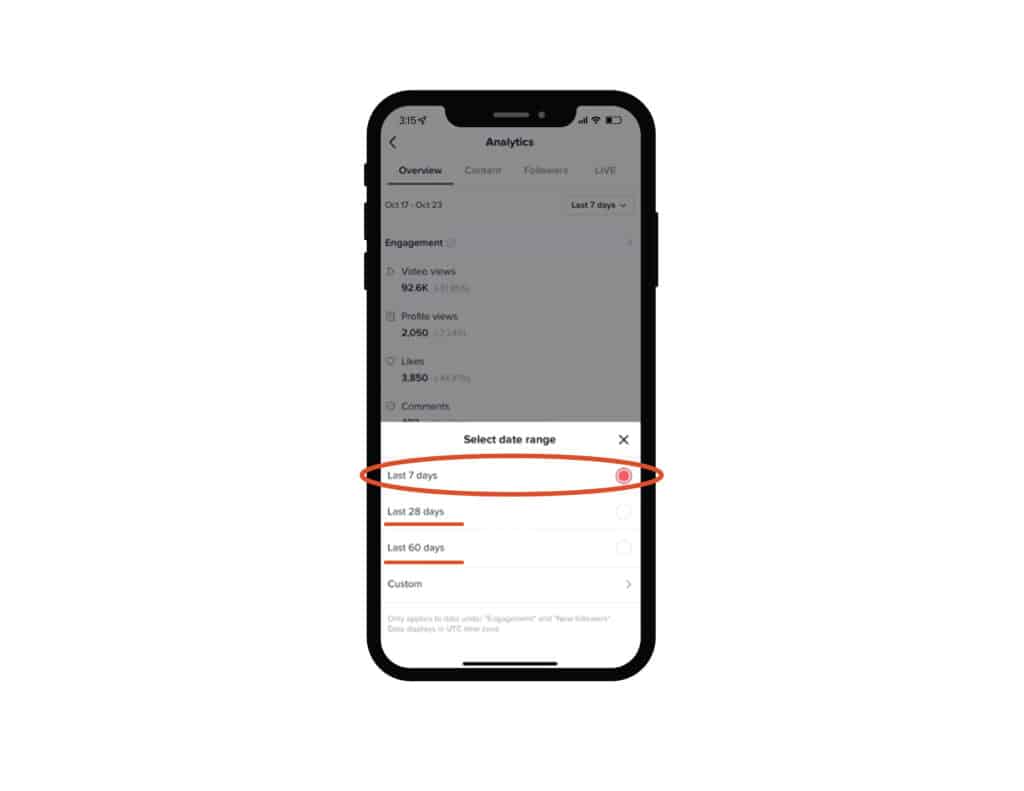 Well, this is going to show us how many views we’ve had on our content, profile views, likes, comments, shares, how many new followers and how many we gained. 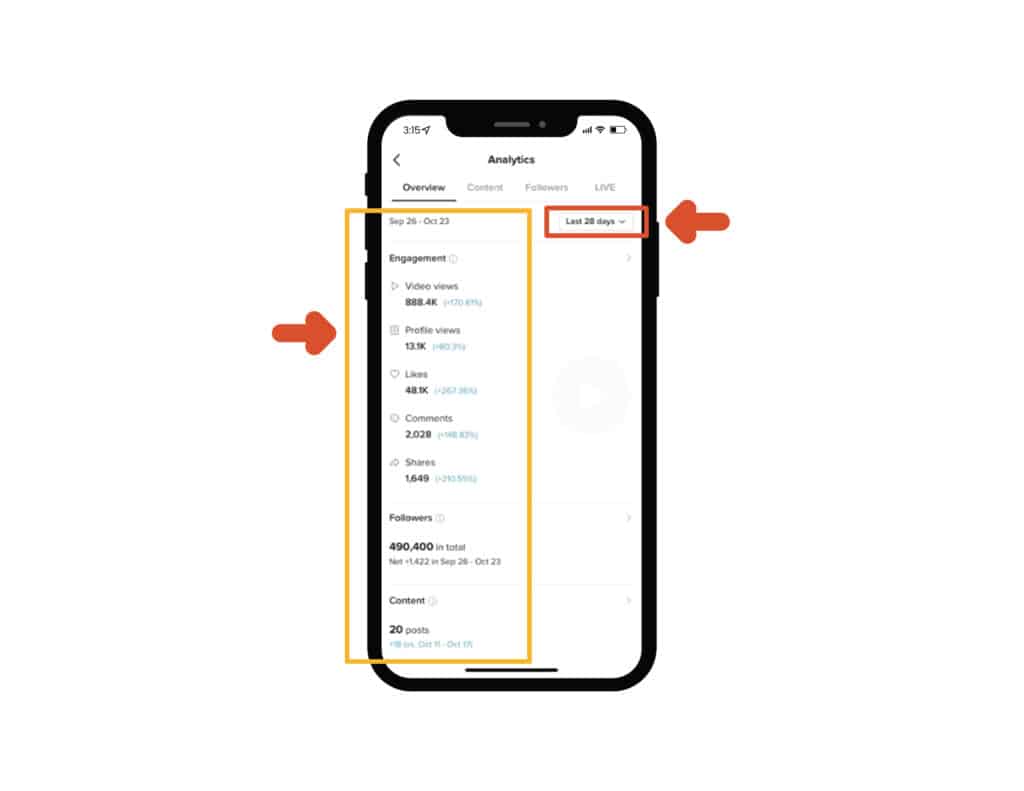 But specifically today, I want to talk to you about analyzing your content on the TikTok platform. 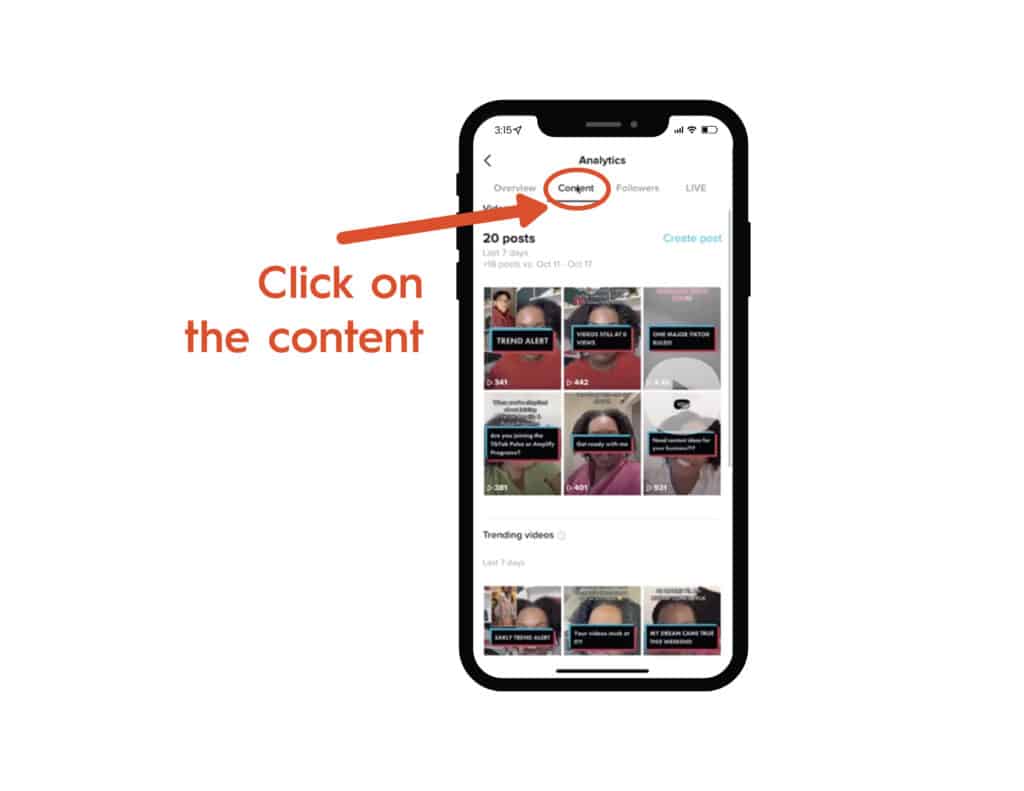 And as you see here, these are my current videos that I’ve posted. And you can see what’s happening there.

But what I want to do is I actually want to analyze some of the trending content.

Okay, so we’re gonna go with this video right here that shows 16.4 views. 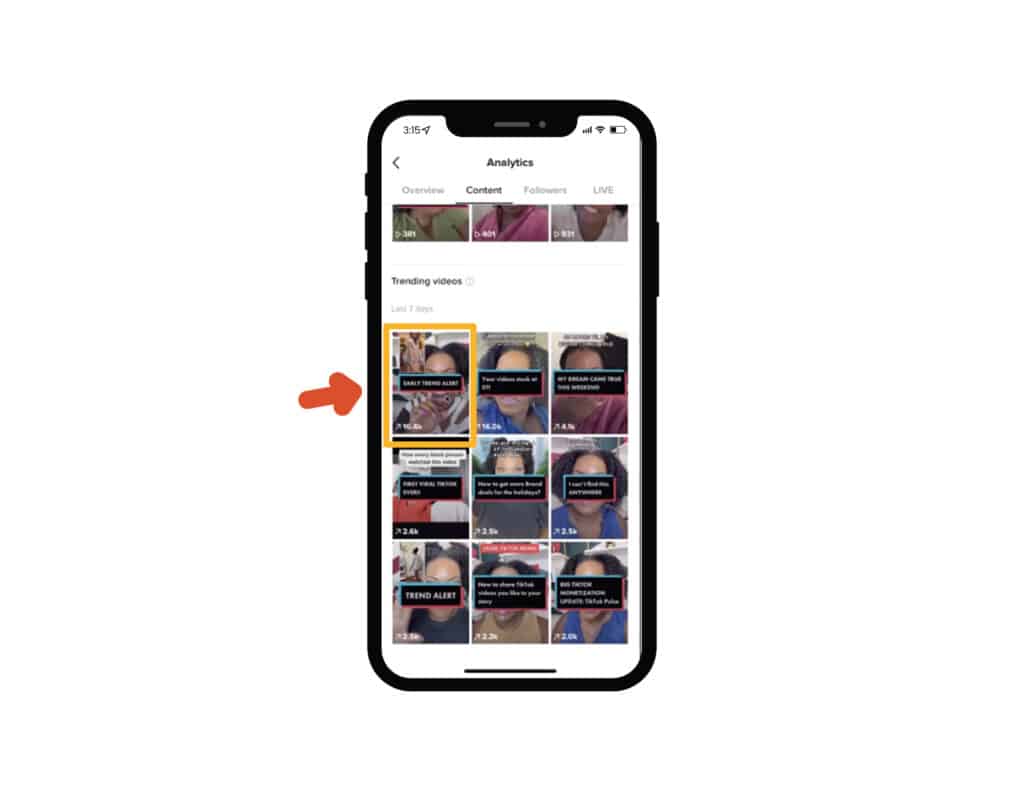 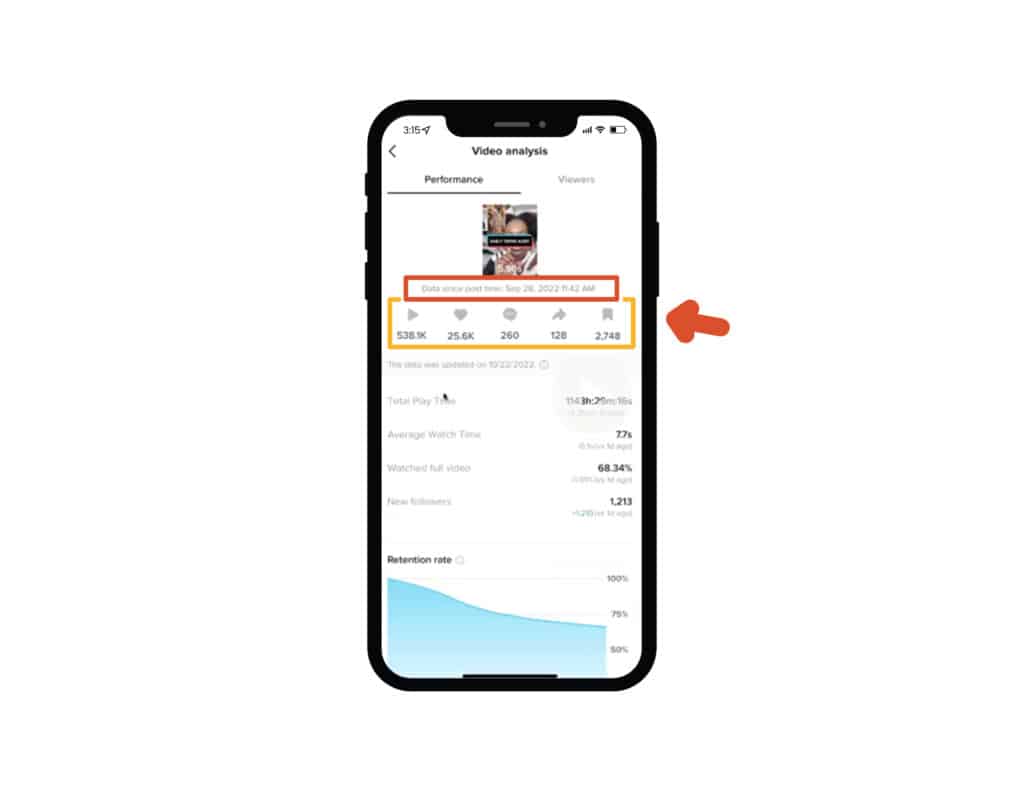 And that video, as you can see, it’s 5.96 seconds long. So this shows you total play time, meaning that it’s been played 1143 hours, the average watch time of the video was seven seconds, the average number of people that watched the video is 68% of people and we gained over 1000 new followers.

The key thing to look at here is this video is 5.9 seconds, and the average watch time is 7.7 seconds.

They care about average watch time.

Let’s just say that this video was 60 seconds, and the average watch time was seven seconds.

Well, that’s not a great video because it shows TikTok that this video is 60 seconds long, and people drop off after seven seconds.

But with this particular video, it’s 5.9 seconds, and the average person watched 7.7, which means they watched it and they re watched some of it.

Also the key thing to be mindful of is watch the full video, TikTok really, really, really wants people that are glued into your content.

Because one of the things that TikTok cares about more than anything is they really care about T.O.P., which is time on platform.

People spending the most amount of time on the TikTok platform.

And the number one way to keep people on the platform is serving them content that they’re interested in.

And so they realize that, “Hey, we sent this piece of content to these people, most of them watch at least 50% of the video then that’s telling them people love this content. And they love her” In a sense, right?

One, making sure that people watch your video all the way through.

If they can loop it, it’s even better.

You also want to get people to at least watch 50% of your video.

Because TikTok love they’ve made it halfway through.

But the next thing you really want is you want to try to drive some engagement with your video.

Because if people start saving, sharing, liking and commenting.

That’s continuously telling TikTok “Hey, people not only watch this video, but they’re also engaging with it”

And it’s also going to cause your video to perform even better as it’s trending through the TikTok for you feed. Okay.

So let’s go back and check a video that may not have done as well as that one. 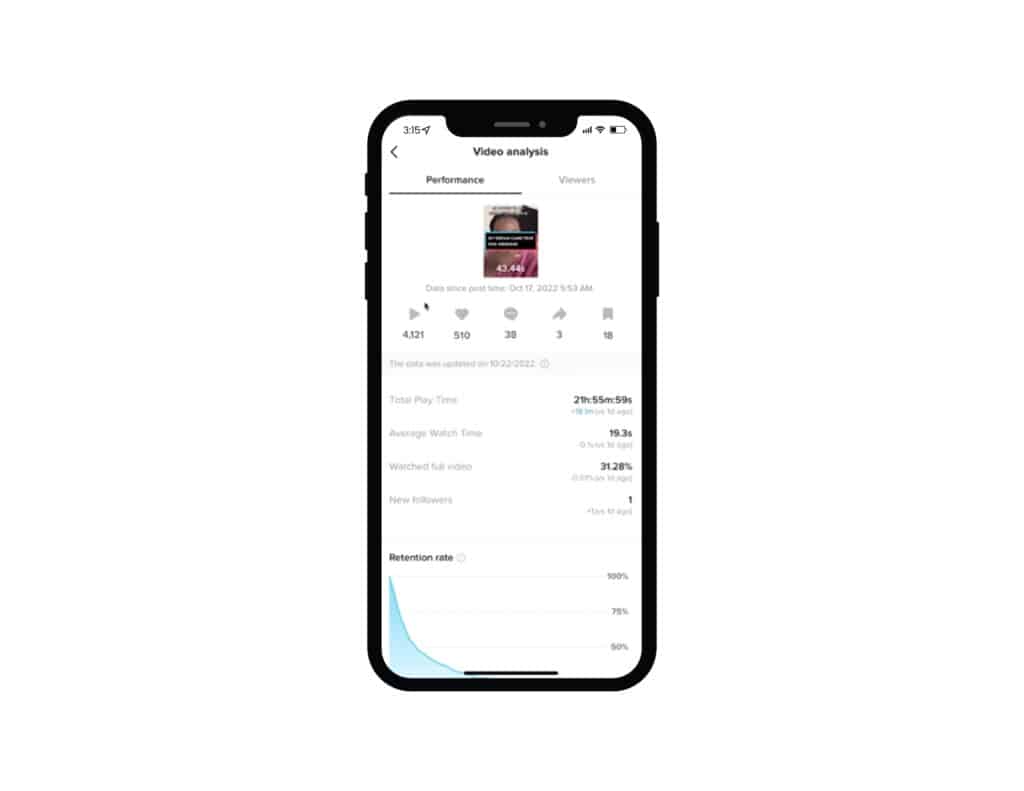 Okay, so this video here, the duration of this video is 43 seconds, it was played 4000 times, total play time is 21 hours, average watch time is 19 seconds, that’s less than half.

So the watch time of the full video is only 31%. So what that means is that people dropped off with this video really, really quickly, they barely watched the entire video.

And as you can see down here, this is the retention. 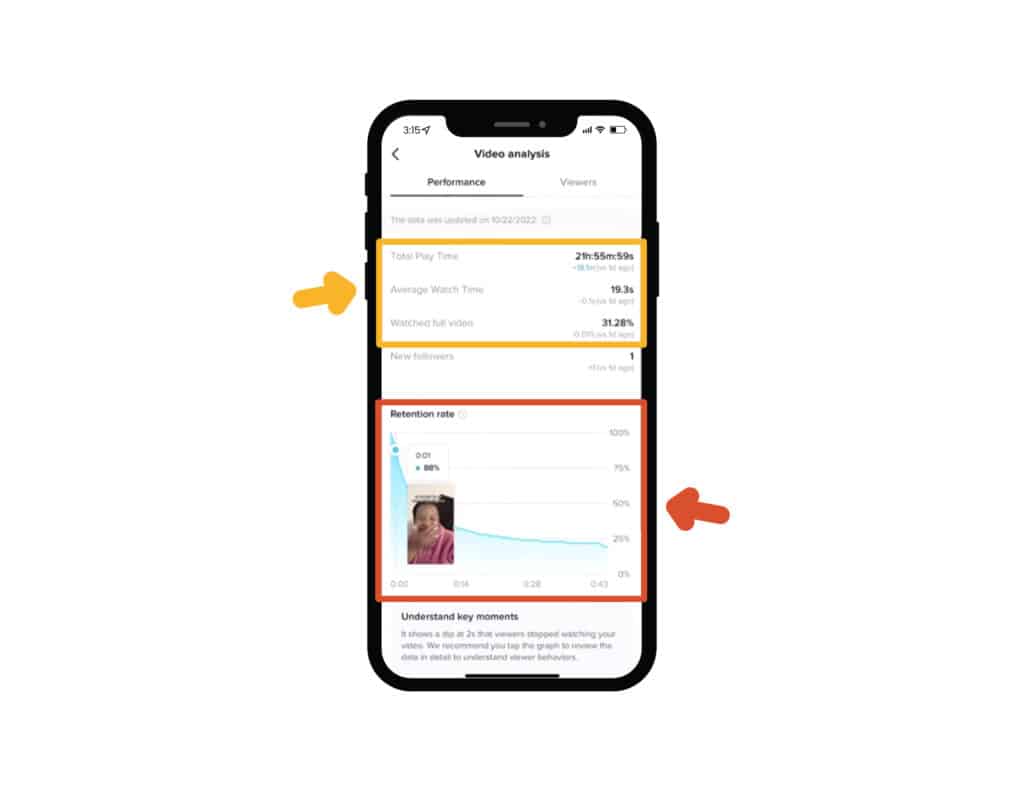 This shows you that it dips really really fast at like two seconds. Okay, two seconds of the video is a dip. Dip by three seconds, 64%.

So people just did not make it all the way through in this video. And I’m okay with that, because I really wanted to put this content out.

But if I was being very intentional with every piece of content, this would be a very bad performing video.

So let’s check on this video right here, which I know is a very, very hot video. 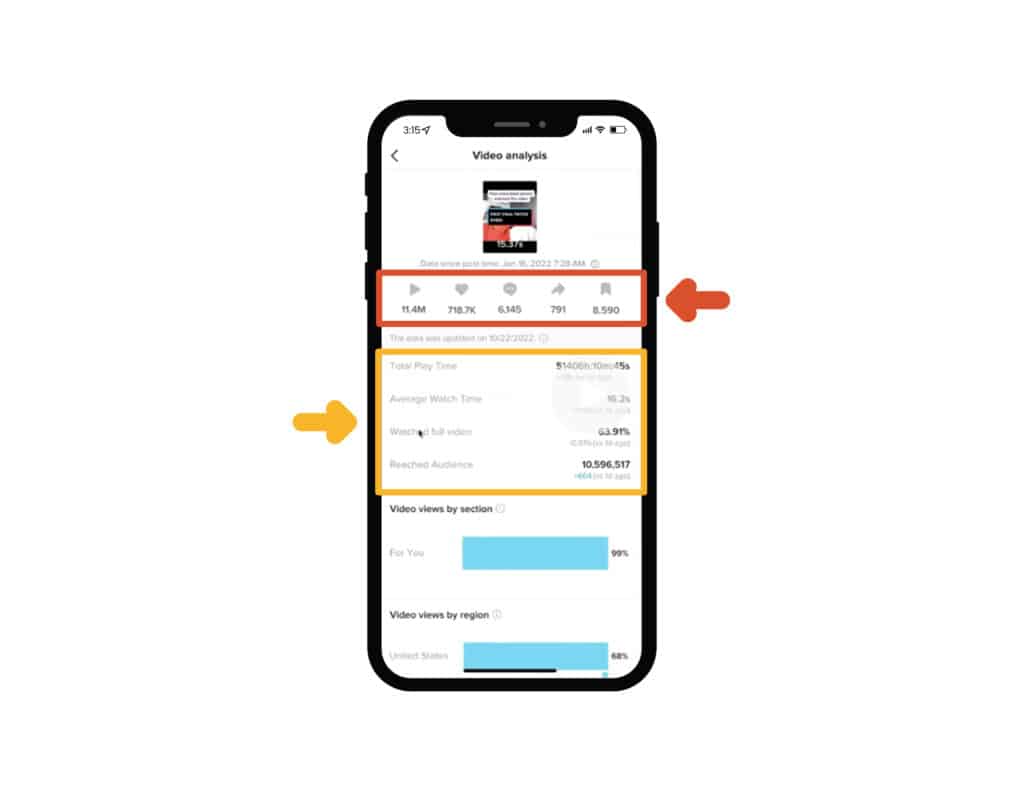 Because every single time I put this video out, people are so emotional about it, but it’s funny.

So this video is 15 seconds, and there’s 11 million views on it. And you can see the average play time is 51,406 hours, average watch time is 16 seconds, meaning that they watched it all the way through.

Watch the full video and 63 seconds and their audience reached was 10 million people.

I mean, it’s incredible, as you can see what happened with this particular video.

So when you’re talking about creating a piece of content on TikTok. You want to try to be very, very, very intentional.

And the best way to know what people are loving with the content you’re putting out is to go back and actually analyze your content.

If you’re not analyzing it, then you’re just continuing to just put things out there and you’re not being intentional with the pieces of content you’re putting out there.

Because again, the number one thing that we want as business people is that we want the views of our content, we want them to opt in and or purchase our product or service.

And one of the best ways to get the most eyeballs on you is to be very intentional with your content and know what to do by looking at your analytics.

If you found value in this article and want more strategic ways to grow your business on the TikTok platform or if you’re looking for a coach to help you, I would be so honored.

We work with clients and one of our clients recently made over a million dollars this year from the TikTok platform and so if that’s you and you want to make more money on TikTok. Be sure to check more information about our VIP Laser Coaching Program HERE.