Welcome back to another topic of the You, me, and Jesus article.

I’m so excited for this series!

This is our series where we’re talking about ways to be able to hear God, and talking to a mentor!

Your mentor is not God and should not be your only time you talk to God, period.

You wanna make sure that your first line of ask is always to God every time you have a question about something.

Now, I will tell you about my personal experiences.

So for years I would get a mentor and I would make the mentor into God.

I mean, I did that for years and unfortunately it cost me some relationships.

It caused me to not really think that I was hearing God, and I’ve made so many mistakes in my life.

If you’re reading, “Jennifer”, “Daphne”, anybody else? “I’m really sorry”.

So it caused me all that because I am making them into God.

I didn’t know that I was doing that, but years later, now that I have been on my journey with God by myself, I’m like, “oh, this is what that looks like”

So what does it look like as it pertains to hearing God with talking to a mentor?

So I have my mentors, and she or he has a personal close relationship with Jesus.

What I do first is I go to God first.

I spend time journaling, praying, talking to God and all that to get an answer.

And I typically get an answer!

So I don’t go to the mentor until I have some type of answer.

Now, when I need to seek a mentor, it’s because the answer is conflicting or it’s confusing.

So I have this answer, but there’s this part of me that is saying, “it doesn’t seem right”

And so when there’s this double mindedness of what’s going on.

Like the Bible says, “a double minded man is unstable in all his ways”

And so when I’m finding myself in this double minded state, coz that could happen to anybody.

Then that is when I bring a mentor into the picture and it’s because I need someone else first of all, praying into the situation.

I’m not necessarily going to the mentor so they can give me God’s answer for me.

I’m going to them because I need to invite in counsel because there’s scripture in the Bible that says, “through the multitude of counsel, there is safety”.

When I think about what that means, safety means multiple opinions or wisdom or revelation.

So not just an opinion because he or she has one, but like revelation and wisdom based upon the years of experience, the relationship with God, then with me and all the things. When I’m trying to hear God, here is what I do with the mentor. 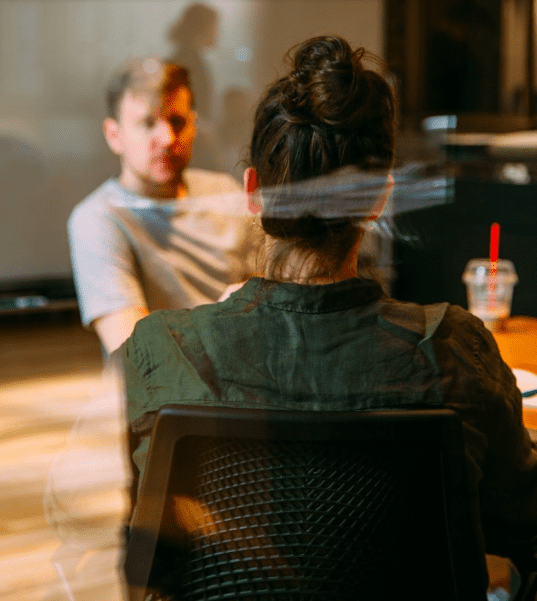 I will say to the mentor, “okay, here is my scenario. I want you to listen in on this. See if you’re hearing God say anything as I share this. If you hear anything, feel free to share. If not, I’m inviting you to pray so that I can hear clear.”

And then when I tell them whatever the scenario is, I don’t leave anything out, whether it’s gonna make me look good, or make me look bad.

Whatever it is, I tell them all the things so that they have all the information.

Because sometimes we don’t tell people everything because we were ashamed, or whatever’s going on.

And I’m like, the best way to get the best advice or wisdom from a mentor is for them to get all the things.

That’s why you can’t be out there doing nothing crazy.

So that’s why you gotta be submitted and not do all the foolishness.

That way when you go get some advice, you’re not trying to hide, you know what I’m saying?

Y’all know what I’m talking about. We’ve all been there.

So I tell them the whole scenario and I say, and this is what I’ve done with God.

And, I’m just telling ’em everything.

Most times my mentor will not tell me what they’re thinking or feeling.

A good mentor will start asking you more questions because the greatest thing is for you to get clarity from your own self.

I think about a year or two years ago, there was a guy who resurfaced in my life.

We are friends forever. I mean a whole deal with this person.

But this was a person who I dated for a short period of time and kept trying to get me to have sex outside of marriage.

Cause at the time I was a virgin before I got married to my ex-husband.

And because he just was not about that life of waiting to marriage.

I remember breaking up with him.

I said to him, “I just feel so much pressure and there’s so much more to me than just my body. So we just can’t do this”

And he resurfaced after years.

And we were still on the same page, just still like finishing each other’s sentences and all the things.

So I just was wrestling because he wanted to come and see me, and I was just like, “well, maybe he’s finally ready and I’m ready for remarriage”

So because of that, I found myself in this wrestle because I don’t think that he’s gotten super spiritual.

I don’t think he’s like holy, that I would want him to be going to church, submitting.

I just don’t think so.

And like even the way that the vibe that was happening on the phone with him, I don’t think he’s changed.

And so I got on the phone with my mentor and I’m telling him this.

And normally he just asked a lot of questions, but he was just like, No.

He goes, “No, this is not what that looks like. You know, first of all, if it’s God’s man, you’re not gonna have to try to convince him”

Everybody wants to have sex, period.

But we submit to the Lord and choose not to because we wanna honor and be pure and all this type of stuff.

And he goes, “So you have to get someone who is like on the same page with that and who will say, I want you, But I love God more than I want to be with you”

That’s what I needed to hear.

Sometimes when you want what you want, you need wisdom.

This also was a time when there was this really, really, big business deal, and it was actually earlier this year.

Someone wanted to partner with me and it had potential to make me a lot of money, but it also had the potential of making somebody else a lot of money and me not much money at all, “Short term and long term”.

And so when I got on the phone with him, he was asking a lot of questions.

My mentor never told me what he was thinking, but he said in the end, “I am praying and going to pray so that you can get very clear on what God is saying”

And I said, Okay.

And within a day or two, I knew my answer. It was like that.

And because it wasn’t about what he said or what God said to him.

It was the questions that he asked me.

And then him saying, “you know God, you know He’s gonna help lead you in the right direction”.

And I came to find out it was a bad business deal!

Not with a terrible person, but not the best person to be in business with for me.

And so it was so valuable to have that guidance and wisdom come from Him as a mentor, which was “questions”.

And so if you’re on this journey of trying to hear God, like being able to invite people into the conversation.

Giving your mentors an opportunity to pray!

Like a lot of times I’ll ask my bestfriend, to just pray.

It doesn’t mean I’m asking her for her guidance.

I remember this one time kind of crazy, but when I was going through divorce, I was used to engaging in intimacy with my ex every night or whatever.

And I still wanted that, even though I was going through divorce. I didn’t want him, but I wanted it!

And I wanted it! He wanted it, and I was gonna go fly and go and see him.

But it was like I had this thing that was just like, “NO! That’s not what I want”

First of all, I’m still married.

Second of all, I don’t sleep around.

That’s just not who I am.

That’s just not what I do.

That’s not what I have ever done.

And one of my friends was quoting scriptures and I said, listen, “I don’t need your scriptures. I know what you do every single day. And listen, you are not one to quote scriptures to me.

And I said, “but I’m calling just so you can pray, because I want the Holy Spirit to arrest me, to help me”

Not necessarily convict me, so to speak.

Cause it’s like I was already convicted, but it was like I wanted the power of the Holy Spirit to help me to make this decision to not to.

I fully explained that.

I’m like, I just need God to just give me the strength because the Spirit is willing and flesh is weak. I just need the Holy Spirit to come in and help me.

And that’s exactly what happened.

And I ended up calling and said “I can’t do this”.

He goes, “you know, I don’t wanna do it either”

And I was just like, it just wasn’t what I wanted to really do.

I was just lonely and wanting to engage because I was freshly going through a divorce after being very active with my husband at the time but then soon to be ex-husband.

And so that’s why it’s so important to invite people into this journey, invite a mentor in that way you can hear God and do the things God’s inviting you to do.

I know you’re like, “did she just talk about that in this article?”

Yeah! And I know somebody needed to hear that!

It has nothing to do with this subject, but you need to know that.

That’s what you can do if you want to be able to hear God.

Again, this is episode four of our 10 part series. We have another episode that’s coming up.

If you’re enjoying this, write a review in the comment section about what you’re loving about it, because it’s very encouraging for me.

Finally, if you need holy spirit-led guidance? Want to know what God wants you to focus on in your life or business this year? Then a Creative Consult is for you.